These days it carries the name ‘ coffeetablebook’. Beautiful old pictures and old stories, just to scan them, to read bits and pieces or to read it in one go, form the beginning till the very end. This book takes you back to Johannesburg in the beginning of the 20th century. A town of pioneers, fortune hunters, traders, corporate tycoons, the wealthy and politicians. In the midst of it all the Carlton Hotel played an important role.

When the hotel opened the majority of the staff had come from Europe, people with experience in the hospitality industry. People from Hungary, Italy, Germany, you name it. People who saw possibilities for a new start in life in the very south of that intriguing continent. Somewhere in the book it is written about the number of staff, neatly divided in Europeans and Africans. Just a bit further in the book I see a black-and-white picture of the staff. I am unable to see one African. Had they been fired? Were they still at work? Or should not they be in a picture of a posh hotel?

There was hardly any profit in this hotel to be made. It was decided to tear down the old one, this took about a year. Others decided to have a go and purchased the expensive plot in the expensive center of Johannesburg. A new Carlton was built. In the nineties of last century this hotel came to a standstill, not enough customers. The hotel was still situated at the same spot, but the area had changed and for the worse.

This book has been published at the occasion of the opening of the new Carlton Hotel in Johannesburg on November 21, 1972. 500 copies have been printed, all numbered. My copy is number 321 and has been signed by the author. 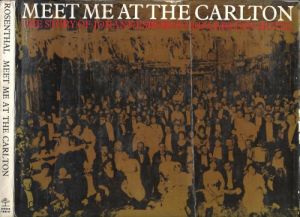