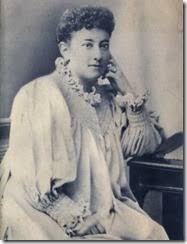 Olive Schreiner (1855 – 1920) wrote a short book, trying to broadcast a strong message about the political and human situation she encountered in southern Africa in the final stages of the 19th century.

Peter Halket was born in England in a poor family. He travels to southern Africa to make big money. On one of his journeys (on his way to fight against the Matabele) he gets lost and stays overnight on a kopje. In the night a stranger comes to him and listens to Peter and talks with Peter. The stranger is a jew from Palestine. He once managed to stay without food and drinks for 40 days, he loves all women, he has wounds on his feet, he takes side with the black man, he was there when they were hanged. He knows Cecil Rhodes. He belongs to the biggest Company of all. He calls Peter by his full name: Peter Simon. Peter wants to join the Company of this man and then the man asks him to go back to England to speak out aginst injustice. But Peter cannot do this. Next the stranger asks him to speak to the whites to make peace between Boer and English. The stranger writes two words in the ashes of the fire and wipes these words out again. Peter calls him: master. And the master challenges him to let the kingdom of heaven blossom. In the darkness of the night the stanger disappears.

In the second part of the book Peter is in a military base in the bush. Black people far and wide have been killed. One of them is still alive, but will be executed by the soldiers. Peter sides with him, so the captain orders him to guard the prisoner and execute him the next day.

And then the story unfolds.

The message of this book must have been the voice of one calling in the wilderness.