There is a centuries old clash between a tradition and invading perceptions. The invading force can be a religion, crime, modernity, dominant culture in a country, an outspoken person. Sometimes it can be an internal force as well that wants to change the tradition and bring it into rapport with the times. 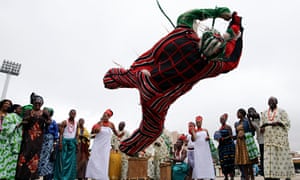 The title is a bit misleading, in my perception. Chika writes about a complex situation with different church denominations who have different opinions.