Ayaan Hirsi Ali (or as it used to be Ayaan Hirsi Magen) is a Somalia-born former Dutch politician. In this book she tells about her background in Somalia, her ancestry (very important), the clan she belongs (very important), Saudi Arabia, Ethiopia and Kenya. Her father is involved in Somalian politics in the days of the dictator Barrè and later on. Most of the time he spends away from his nuclear family working for the political causes of Somalia.  This work of his forces his family to stay in other countries. For Ayaan these years have been very formative, for she saw at first hand the strict ways of Islam in Saudi Arabia. During her stay in Nairobi she gets involved with the local Muslim Brotherhood (also including sisters), she even was present when people protested against Salman Rushdie after the publication of his Satanic Verses.  She decides to dress in a more traditional way. Already at a young age she shows to possess an independent mind and an inquisitive mind.

When her father has arranged a marriage with a Somali man living in Canada she decides to stop her journey to Canada in Germany, she decides to go to The Netherlands where she applies for a status a an asylumseeker. Very soon she gets permission to stay in The Netherlands. She works hard to learn the language, to get acquainted with Dutch life. She does all kinds of odd jobs to be selfsupportive. She decides to go for further studies and in the end she finishes her studies in politicology at Leiden University, the oldest university in The Netherlands. Later on she gets elected to the Dutch Parliament on a ticket from the Liberal Democrats. In parliament she raises the issues of the position of muslim women, integration of people from non-Dutch descent, the negative effects of the islam. She makes a short movie (called “Submission”) with the cineast Theo van Gogh (indeed related to the famous painter) about what the Quran says about women. When Van Gogh is killed in broad daylight in the streets of Amsterdam by a muslim, the life of Ayaan is at danger as well. Security forces keep her in hiding, even abroad. In the end she leaves Dutch parliament and moves to the United States of America to take up a position at a thinktank.

A few things that struck me in this well written book: 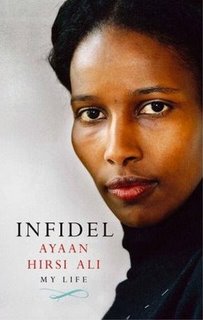