Ken tells about her life as a young girl, raised in the vincinity of a boabab tree, in the remote areas of Senegal. She recounts the extended family in which she grew up. Her mother who left the family when Ken was still small. Drifting from one place to another, sent from one family-member to another. Her father was a man in the background, kneeling 0n his prayermat and being a father for many people, not just the children of his wifes, but for all people who came to him for advice. But Ken felt neglected.

Ken is a smart girl. She gets the opportunity to go to the French school (as being different from the Qur’an school), against the wishes of her grandmother. In the end she gets the opportunity to go secondary school. She misses out on a scholarships to go to the North (= Europe), but in the end she gets a scholarship to go to Brussels, the capital city of Belgium (not yet the capital of Europe).

We do not read much about her scholarly activities in Brussels, within a few days she leaves the hostel and finds lodgings on her own. Here start a long and dangerous and difficult journey. She moves from one relationship to another, she is on the move from one room to another, just as she was moved around as a small girl. She is seen as an exotic part of society. Therefore white people like to get into contact with her to show their own progressiveness. She feels being treated as an object, to show the goodness of others. She drifts from alcohol to drugs into prostitution.

When she was a young girl she wanted to be French, she wanted to be modern, reading the secondhand fashionmagazines but she was caught between her background and her dreamns. Even in Brussels she wants to join the people she meets, but she is still caught between her past and her present and her dreams. She looses herself in the proces. She looses her study and her scholarship, while she moves from one party to another celebration, as a piece of art shown to others at the art galleries she visits due to her artistic relations.

It is a sad story of a girl and woman stuck in the middle, not being able to discover herself, being an exotic stranger to those near her, both at home and in Brussels. Like an uprooted baobab travelling around, while loosing its roots and dying. 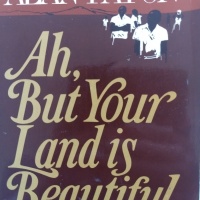