This is a story of a son who tries to understand his father and who  has to come to terms with the legacy of his father.

The father is Ken Saro-Wiwa (1941 – 1995). He was a Nigerian civil servant, bussinessman, writer and activist for his Ogoni people who live in the Niger Delta, polluted by oilspills. He was executed by the Nigerian government of dictator Abacha  by hanging and his remains were put in a nameless gave.

The son is Ken Wiwa (1968) who was born in Lagos, but who was educated in the United Kingdom as his father wanted the best education for all of his children. He worked in journalism, moved to Canada and later went back to Nigeria to serve several presidents as a special adviser. Now he is selfemployed.

In this book the younger Ken searches for his relationship with his father, a father who was a busy man and who was a kind of father to all the Ogoni people. What was his public face and what was his private face? How did his position in society and the activities he undertook effect his fatherhood in the familycircle.

In an honest account Ken junior shows the difficulties he encountered with an absent father, with his own expectations of having to receive or deny the legacy of his father. He talks with children of other famous people who left a legacy: Zindzi Mandela, Nathi Biko and with Aung San Suu Kyi who all three had a famous father. Did they continue the legacy, and how did it effect them?

He also searches the relationship with his immediate relatives, especially his mother. What was his role when his father was murdered by the government? Was he able to take up the leadership in the family. Ken could have taken some more time to relate this in depth, but at the same time this could be a troublesome road, as most of these relatives are still alive. 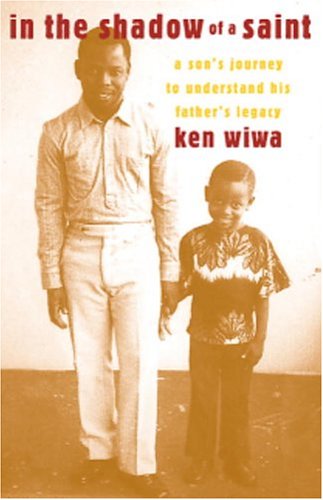