The Senegalese writer Sembène Ousmane takes us to the country side of the West African country of Senegal. We reach the small village of Santhiyu-Niaye. The number of people living in this village declines, young people have moved to cities and places alongside motorways. Old men and women are left, and a very few young people. Dogs do remain and try to find some shade to rest.

Then the shattering news hits the village community. The unmarried daughter of one of the leading lights of the community is found pregnant. The rumours start about the potential father. Could it be the navétanekat (temporary worker) who works for the father of the young girl Khar? He is attacked by Tanor, the mentally disturbed brother of Khar, who fought for the French in Indo China. Finally this innocent young man is chased away from the community.

Finaly the shattering news breaks out. The respected father of Khar is the culprit. Guibril Guedj Diob hails from a respected family-line. The men of the village (including the imam) sit together under a tree and discuss the situation. Does they have to kill Diob? Can they banish him? A cordon sanitaire?

The news is also shattering for mother Ngoné Wat Thadium, her griote friend Gnagma. The son is even more disturbed. Khar is almost left to her own, she carries a child, in her womb, in her arms.  The act of the father not only shatters the family, but also the community. Feelings of shame, of despondency, of lostness. What will be left, when the old and proven ways are left?

Ousmane takes us by the hand and makes us a witness of the deliberations, the slow pace of events, the heat of the sun, the sand under our feet and the sphere of a crumbling society.

(often this novel is published together with Le Mandat (1966), see next week) 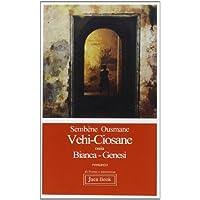