During the Great War (1914 – 1918) the British turned Egypt into a protectorate. Many soldiers came over from the British Isles but also from Australia. In the period described by Mahfouz there is an increasing rebellion against the British rulers.

This is the background to the first part of the trilogy. We follow one family with the patriarch Ahmed Abd al-Gawwaad. He runs a small shop where he spends most of his time. He has sent away his first wife Haniyya, with whom he has a son Jasien. His second wife is Amiena, who bore him four children, two sons and two daughters.

In the private situation Ahmed is the strict ruler who exerts his authority as the father (and later grandfather). Everyone needs to submit to his will. He wants his wife and children to adhere strictly to the islamic tradition and the Egyptian tradition. In the public situation Ahmed is a different man, he has a vibrant social life, after work he goes to clubs, drinks alcohol, has other women. He keeps these two worlds strictly apart.

His two daughters,Khadiya and Aisja, stay at home, just like his wife. It is not good for women to go outside, without Ahmed protecting them from the gaze of men, be they young or old. His oldest son Jasien works as a clerk at a school, Fahmi studies law and the youngest, Kamaal, is at primary school.These young men bring news from the outside world into the secluded house. These young men also have to deal with the freedom outside the house and the need and the duty to respect and obey their father.

Nagieb Mahfouz wrote like a surgeon, using his lancet. He opened body, mind and soul of the main characters of this captivating story. Step by step, inch by inch he moved forward and shared his findings. All the time giving me as a reader an insight into the wondrous world of the characters, with all their complexities. 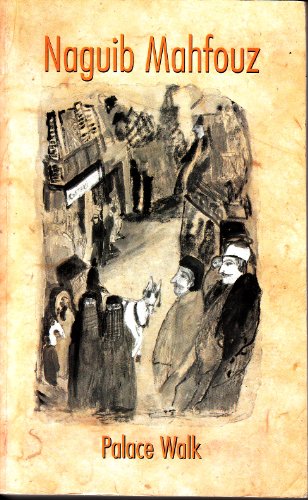