In the year 1942 the writer Albert Camus (a pied noir from Algeria) published his book L’Étranger (The Stranger). The protagonist (‘I‘) in this novel is Meursault, also a pied noir in Algeria. This Meursault kills man, a man without a name. His only ‘name’ is Arab.

In the year 2013 the writer Kamel Damoud (an Algerian) published his book Meursault, contre-enquête. The protagonist (‘I‘) in this novel is Haroun, the younger brother of the Arab in the book by Camus. Haroun was 7 years young when his elder brother was murdered. He heard the stories from his mother. He heard the stories in the news. He heard about the fame of the writer who killed his brother. Now he wants justice, and for him justice is finding a balance. Reaching the point where there is equilibrium.

Haroun tells the story of his life and the absence and at the same time the presence of his brother Moussa. The Arab who did not have a name in the novel by Camus now gets a name, a small monument erected by his younger brother. The protagonist tells about his search for his brother who has never been found, he tells about the visits with his mother to the empty grave.

One thing that irks Haroun is the fame of the writer, the writer of that novel is a murderer but his fame was growing and growing (he even received the Nobel Prize for Literature). His big brother was turned into a nameless Arab. Would his name have been mentioned in the novel, he would have been famous as well.

In his brilliant and captivating novel Kamel Daoud switches from past to present (the framework of the novel is set in a cafe where he talks to a person who loves the book by Camus), from Meursault to Moussa, from the old book to the book-in-writing, from an empty grave to an unknown grave. Slowly but surely the events are being uncovered, the new facts seep in this new world where the Arab has a name, a family, a background, a longing.

I cannot remember I have ever read this book by Albert Camus. Would it have been better to read Camus first and afterwards Daoud? Maybe. But even without this order I was drawn into this story.

I highly recommend this book. 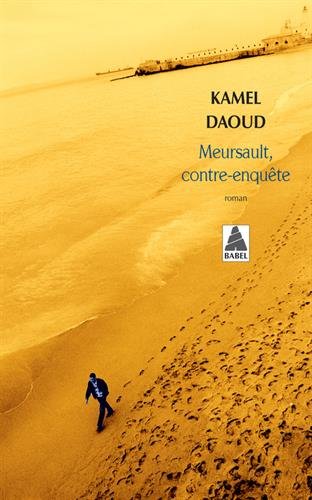