The writer of this travelogue is Fiona Stax Ledger who worked for the BBC Africa Service for about ten years. During this period she travelled to many countries, met many people, saw many sceneries, she travelled in many way to many places.

In this book she recounts moments of this period chasing news, but in recounting she looks at those moments just next to the news, next to the headlines, next to the importance of office bearers, next to the main issues. Stories are everywhere, you just have to look to see them and to write them down. There are no stories about Africa south of the Sahara, as if the north is a different continent. The Sahara has not been a barrier throughout history but a highway of its own kind, making possible travels from north to south and from south to north. And not just travels but influences as well.

Fiona does not follow a chronological journey, but she groups stories to form a theme. She writes about about corruption, about visits to Angola and her attempt to interview Njoma, trips to eastern Africa, tailors, cars, beautiful people and the way they behave, white legacies, entertainers, her charms and her drinks, just to mention a few. Do not expect mind boggling discoveries, but do expect a well written book. And this is what she has produced, a well written book.

One of the people she thanks at the end of her book is Israel Wamala, the famous Ugandan broadcaster who worked at the BBC. He passed away in 2006. He was married to Fiona at the time of writing of this book.

Fiona Stax Ledger – Mr. Bigstuff and the goddess of charm – 2000 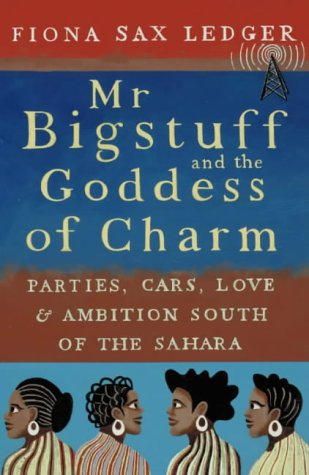