These is still a flow of books on the first president of the post-apartheid South Africa. Nelso Mandela still rings true and his name is connected with a man who tried to build bridges and bring people together. He wrote books (with ghostwriters ?) and others wrote books on him and his political context. It could be that that enduring attention to the work and life of Nelson Mandela is in part due to those who followed him in being the president of South Africa.

Thabo Mbeki did not have the same stature as Mandela, maybe he was aloof, to different from mainstream from South Africa, alienating people by his views on HIV/Aids. Jaco Zuma seems to have not stature at all.  His name is connected to corruption, self enrichment, handing over the leadership of the country to a few men from the east. 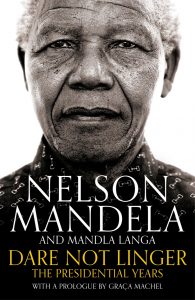 Nelson Mandela was working on a book on his presidential days, but he could not finish it. The writer Mandla Langa did finish the book and Zelda La Grange did the typing. She has been a secretary to Mandela and she wrote a book on the man. She tells about her part in finishing the book Dare not Linger.