He heard music.
He was researching and he heard the music and he wanted to hear more.
It was pygmy music from central Africa.
He decided to go there and record music, more music, trying to understand this music that brought him in a totally different world. First he contacted Colin Turnbull, the man who had lived with pygmy and wrote about them.

Sarno travelled to the Central African Republic and searched for a suitable place to be close to pygmy. He finally ended up in a small Bayaka community at the edge of the forest. He listened, he recorded, he listened, he tried to speak some words, he stayed and he listened, he was an outsider at the edge of the circle. He stayed longer than planned. In a way the people with whom he stayed accepted him and allowed him to be part of their loose community. They made music. They sang their songs.

Sarno had left everything behind (not mentioned in the book), he ran out of money and out of cigarettes (bargaining material). He travelled back to his roots, but he came back and he stayed and he stayed and he recorded. He shared his life with the others in the group. They moved further into the forest at certain times. He falls in love with a young lady, but how love and relationship and marriage work in this context is a complete mystery to him. He wanted to stay with this young girl but all kinds of practicalities seemed to hinder his intention.

There were some other outsiders near the place he lived and interacted with the pygmy. The people from the sawmill, that in the end collapsed, Roman Catholic missionaries who interacted with pygmy (with quite different results as compared to Sarno) and later on people who worked at the Forest Reserve that included the areas where the pygmy wandered.

Louis Sarno stayed and stayed, far beyond the time span mentioned in the book. He first arrived in 1985 and stayed over twenty years in the bush, recording and living his new life. Some of the music he recorded has been published. At the end of his book he gives information on published music and books. He gained citizenship of the Central African Republic while keeping his original one of the United States of America. In the end )not part of the book) he married a Bayakan lady. In 2013 a documentary on his life was shown for the first time. He passed away on the first of April this year, not in the forest, but in New Jersey (USA).

This book is an amazing record of his life amidst people with a totally different culture, but his love for their song and music made him to stay and persevere and be part of this life. 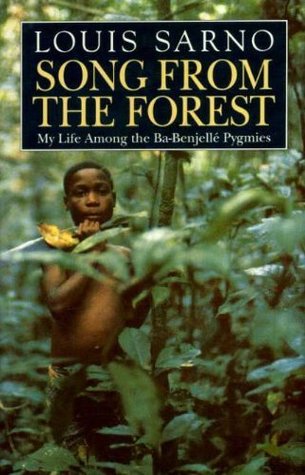