Let me first write a few things about the author Philip Caputo (1941), for this will help in finding the context for his book  Horn of Africa. He worked in the American army, serving in Vietnam. For many years he was a journalist in the Near East (or Middle East) as a correspondent for The Chicago Tribune. He got shot during a battle in Beiroet in 1975 In 1972 he (together with others) received the famous Pulitzer Prize for journalism for their research on fraudulent elections in Chicago.

Some points of his life come back in this novel set in the horn of Africa (with flashbacks to Beirut). The protagonist who tells this story is Charlie Gage, a journalist for the Los Angeles Post who has worked for many years in the Near East. Earlier in his life he served in the army of the United States of America in Vietnam. During the course of the enfolding story he gets severely wounded in action.

Well so far the relationship between life and fiction. Let us meet some of the characters in this book. Let me name: Thomas Colfax (real name is Jack Gardner) who runs a Bussiness Inter Arab Developoment Ltd in Caïro. In real life he is an agent of an American intelligence branch. The other one we have already met: Charlie Gage, who worked as a correspondent, but now spends his time in Cairo as a free-lancer. Through Coldfax he gets a job at Arab Digest (another cover operation). Jeremy Nordstrand, who is a mysterious figure but who turns out to be working for the American government as well (at least that is what he thinks). Let us meet now Patrick Moody, he is British, an army man, born and raised in Sudan. Gage, Moody and Nordstrand are recruited by Coldfax for an undercover job in the Ethiopian province Bejaya. All three of them speak Arabic fluently and that will be a great help in their task.

These three men have been recruited by Coldfax, for a job in the Ethiopian province Bejaya. Coldfax wants to support one of the local warlords Muhammed Jima. He is not one of the important ones, but Coldfax wants to use him as a means of getting influence in the leadership of the province where people want to separate themselves from the central authority. The three recruits needs to infiltrate the province and bring a ship load of weapons to Jima. Jima needs modern weapons to help his ethnic group to rise to power and influence. The three men have no experience in working together and during the clandestine operation it shows that they find it hard to cooperate. Moody is the official leader, but Nordstrand finds it impossible to accept leadership. Gage is an observer.

The three men doe not care for the official reasons for their operation. Each one has his own motive for joining this journey. Each one has a past that has shattered their view on life. This journey gives each one of them a reason to come to terms with the past. In this story this is connected with the level of violence the men are using. How far will they go? What will their reckoning with the past cost? To themselves and to others?

At times the story is a hotbed of stereotypes with three strangers on the continent. But I wondered at the end: who is barbaric and who is not? Who is primitive and who is not? 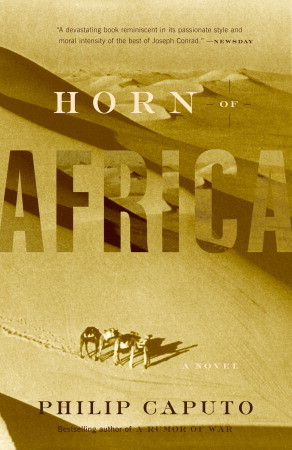