Why did this book stay for such a long time unread by me? I do not know. The spine looked at me many times, and every time I tried to avoid that look and continue with my life and other books. The time has come. The time is now.

Paradise is near. It is the shanty town where Darling (10 years young) and her bunch of friends do reside. This Paradise has not always been the place where Darling and her parents lived, her previous abode was flattened on instruction by the government. Once a while the bunch of friends explore other areas of town, like Bulgaria where posh houses and posh people live and where guava grow, a delicious fruit. Another venue for exploration is Shanghai, where Chinese are mining.

The father of Darling left his family to go to South Africa in search of work. When he suddenly turns up in Paradise he is very sick and emanciated. HIV/AIDS is present between the lines but not mentioned.

The first nine chapters of the book center around Darling and her friends in Paradise. Each chapter reads like a separate story, with a different location.

Chapter ten is a very short chapter in which things fall apart. It is the bridge between the first nine chapters and the remaining part of the book. At first Darling is in Paradise, from chapter 11 onwards she is in Detroit, Michigan (USA). Maybe Michigan is a kind of paradise as well for her and her aunt Fostalina who took Darling to visit her and stay with her. The house of aunt is a meeting place for all kinds of people from Zimbabwe. Darling overstays her three month permit to stay in the country. She lives without the proper documentation and so gives us an insight into the life of illegal immigrants. These illegals are stuck in their ‘new’ country. They do not move out, they are not allowed to stay in. Estranged from their roots, Paradise Lost. Strangers in a new country, that is closer to hell than to paradise. From Detroit she stays in contact with her friends and relatives in Zimbabwe. She has travelled a long distance, but the world is shrinking. At the same times she is getting alienated from her roots and she has trouble understanding her friends who stayed in Paradise.

In chapter 6 the children try to help one of their friends (Chipo) to get an abortion. In this medical attempt it is mentioned that they need to get new names for this situation. The names they use are those from medical personel from ER, an American medical series. The second set of new names come in the USA, where old names are shed and new names adopted or given by parents to their children born in the USA.  Personally I thought about the new names given to the believers in Christ, according to the book of Revelation (Bible).

NoViolet has written her debut in a very pleasant style of language, using the colloquial of children in Paradise. I wondered how much of the novel is an ego-document. Retelling her own experiences, mixed with her imagination.

I thought the first part of the book was better than the second part. Things fall apart. I thought too many situations were mentioned and referred to in the second part, as if NoViolet wants to squeeze all kinds of experiences of (illegal) immigrants into one young Darling.

Overall, I thought this was a good read. 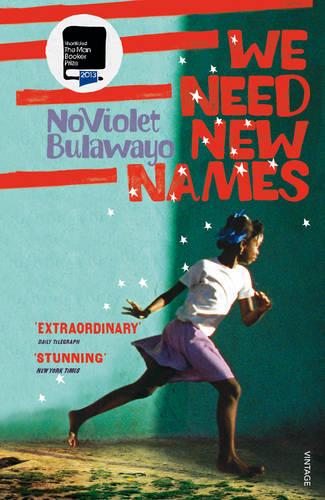