This is the second book by the South African writer Deon Meyer that I have read. Now I have turned to Devil’s Peak, a book published in English in 2008. This makes clear that I am lagging behind about 20 years. This time span however did not turn me into a time traveller. I was reading in the moment, captivated by the people that flock this book.

Benny Griessel, the detective with a yearning to hit the bottle, struggling with the booze and his wife Anna and his daughter and son. A man who has experience and struggles with his colleagues, due to affirmative action or not.

Christine van Rooyen, a prostitute from a decent background (at first sight), who settled in Cape Town with her little daughter Sonia, trying to survive in a world at the edge.

Thobela Mpayipheli, a former hitman of the ANC, travelling through Europe. He is the father who sees his adopted son Pakamile being killed by two violent robbers. This turns him into a man with a new mission. No longer a battle in Europe, but at his home turf. Looking for people who have abused children.

Carlos Sangrenegra, a Colombian drugslord, living the high life in Cape Town, overseeing the deals by his brothers back home, making sure the goods are put on their way to Europe. He is addicted to young women, of which Bibi is one.

The structure of the book is more complicated that a division into three parts. Subdivisions, scuttling back and forth in time, holding back information and names, sub-plots, personal struggles, families falling apart, policemen in need of some money on the side.

The name Devil’s Peak came across one in this book. What we see however are peaks in devilish activities and the attempts to fight these activities (devilish at times as well). So there are no easy answers when evil  sweeps the streets and alleys and kopjes.

While reading this book names like John le Carré, Frederick Forsyth and Graham Greene came to my mind. Deon Meyer has already made a name for himself with his high quality novels, not just once, not just twice, but a high level over a long period. 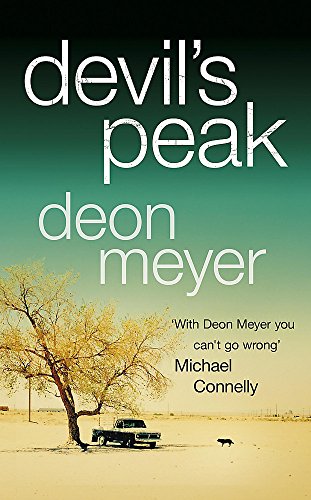