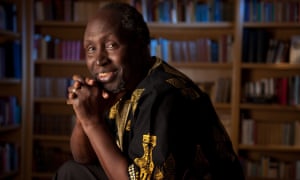 Ngũgĩ wa Thiong’o is a famous writer from Kenya. Many years ago he left the country on the east coast of Africa and he moved to the United States of America. Kenya has often been a harsh mistress for him. In the year 1978 he was detained without trial. He wrote a book about this period behind bars. The book was titled Detained: A Writer’s Prison Diary (1982). Now this book has gone to the printer again, be it in a slimmer version and another title. Now it is titled Wrestling with the Devil. In the opinion of the writer the theme of resistance is a never ending theme. In this interview you will encounter the writer himself.