A boxing glove hit my stomach at full speed. It left me with a sick feeling and a painful head. The glove came with a name and the hand in it came with a name. ‘A dry white season’ and ‘André Brink’. The South African writer Brink passed away in 2015 when he was on his way by plane to his native South Africa.

The story in this novel is set in the days op apartheid in South Africa. The white Nationalist Party is in power, trying to fight of forces from the outside (the communists and many others) and from the inside (ANC, English speaking liberals, the odd Afrikaner, who is considered a traitor to his own people). By all means the Afrikaner population tries to stay in power, so as to continue its own lifestyle and its culture.

A popular novelist receives a phonecall from an old school friend Ben du Toit. Ben wants to have a meeting without explaining the reason for it. When the two men meet Ben asks his old friend if he is willing to receive a pile of papers to keep for Ben and keep it secret. Ben does not offer much information, but the novelist accepts to receive the papers. Shortly afterwards he receives by mail a thick envelop. Shortly afterwards Ben is killed in a car accident. Still the novelist receives a letter written by Ben in the hours before his death. The novelist starts reading an sifting through and ordering the papers and newspaper cuttings and notes and scribbles, after he reads about the death of his old friend.

What is so special about the paper send by Ben? What is so important about Ben? Ben du Toit is a teacher at an important secondary school. He is married to Susan, with two daughters (Suzette and Linda) and a son (Johan). He is your average kind of man, interested in his work, lends a willing ear to those boys who want to talk to him about personal problems, is a church member and holds the office of deacon. But he is not interested very much in the special world, named South Africa. He is content with the way his life flows. He is confident that he lives in a country where the rule of law is important.

One of the people he gets to know at his school is Gordon Ngubene, a cleaner. He and his wife Emily have a son, Jonathan. Du Toit decides to help Jonathan with his schoolfees so he can attend secondary school. During the times of the Soweto uprising young Jonathan gets missing. Ngubene asks du Toit for help. What happened to Jonathan? Is he dead? Is he in police custody? Ben contacts a lawyer Levinson who has experience in this field. After many weeks the Special Branch tells that Jonathan has died. Ngubene wants to know what happened to his eldest son. So he starts his own investigations. It does not take long before Ngubene is picked up by the Special Branch. Ben du Toit is being sucked in into this situation. He expects decency form the established order, police, judiciary. After Emily Ngubene turns up at his house and asks for help he decides to visit the Special Branch to get information. He meets colonel Viljoen, lieutenant Venter and captain Stolz. It will not be the last time these men meet. Ben and the lawyer Levinson want an enquiry but the verdict is that everything went in a proper way. Not much information can be given by the Special Branch for the sake of security.  Two weeks afterwards Ngubene is found dead in his cell. The official explanation: suicide.

Then Stanley Makhaya arrives at the house of Ben du Toit. He knows Gordon and Emily and is a taxi driver in Soweto, at least that is his cover for he seems to be involved in many things. Stanley offers his help to Ben, who by now still wants to know what happened to Jonathan and what happened to Gordon, his father. Ben also meets the English language journalist Melanie Bruwer, who attended the enquiry into the fate of Jonathan Ngubene. Ben decides to get to the bottom of what happened and he starts keeping notes. Slowly but surely he notices that the forces of powers of the judiciary and the Special Branch and politics (his father-in-law is an MP) all work together in frustrating his search for the truth. His house is being raided. People who want to testify are banned, deported, silenced. His house is being raided by the Special Branch, he receives silent phonecalls, stones are thrown at his house, his phonecalls are being tapped. He is trailed where ever he goes. And the anonymous powers make sure that Ben du Toit knows what happens. Stanley keeps supporting him and turns up at night under the cover of darkness, but even he disappears in the end.

How will Ben stay on his feet? How will his wife react? His children? His dominee (pastor)? And all the others? The readers knows what happened in the end to Ben du Toit for this has already been told in the introduction by the novelist who has received the pile of papers from Ben.

The title of this books refers to a poem by Mongane Wally Serote. In the book it is brought in connection with a boyhood experience of Ben when he herded sheep with his father in search for greener pastures, but many sheep died. Now the adult Ben is also in a dry season, in which it is hard to survive and many sheep fall by the wayside.

This book was banned by the South African government. 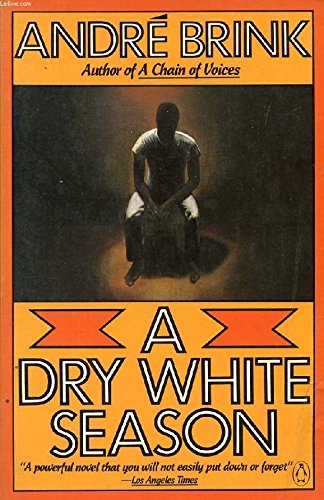