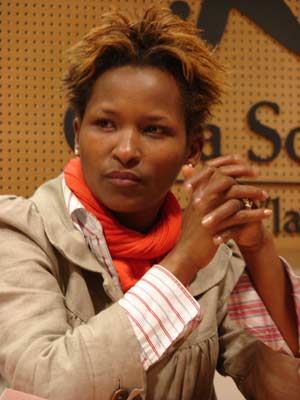 According to China Keitetsi Yoweri Museveni was the inventor of child soldiers. When Museveni was fighting in the bush of Uganda he made extensive use of children to fight his war against the sitting powers in order to reach himself the zenith of power in Uganda. Thousands of children took part in the fighting, were enslaved, were abused in many ways by officers and others who could not carry the weight of power and seniority, were killed, were separated from their parents. YM is still in power in Uganda.

China Keitetsi is one of those child soldiers. She survived, just, and she remembers the names and the faces of many children of her age who did not survive. She and her father John do have a Tutsi background, when Keitetsi was very young she did not know her mother who had been sent away bu her husband. So the young Keitetsi stays on the farm with her grandmother, while her father John lives in his town house. The relationship between grandmother and granddaughter is not a cosy one, but a harsh one. The time arrives that the leadership of Uganda, Milton Obote, is hunting for people with a Tutsi background. This makes life even harder for the family. There is much violence instigated by father John and his mother. John even ends in prison (for a short time) for killing one of the local workers.

In 1984, when she is 10 years young, she manages to meet her mother, there is a party to celebrated the mother and child reunion, but in the night Keitetsi slips away. She is unable to believe it is real. The she happens to meet a group of soldiers of the National Resistance Army. This NRA is led by Yoweri Museveni. This meeting is the beginning of a period of many years (till mid 1995) that she serves the NRA, not in a long straight line, for short times she tries to establish an independent life outside the army. She climbs through the ranks and becomes a sergeant. She gets responsibilities, but in general the NRA does not see men and women as equal. She encounters violence and sexual abuse. Army life often suits her very well. She does not run away of having her own corruption on the side and violence as well. It is part of her life. She has to survive. She has her love affairs. She trusts people, but almost all the times, she receives mistrust and betrayal. She works as a body guard for Kashillingi, who later falls out of grace with the military leadership of the NRA. This also affects the position of Keitetsi.

In August 1995 she tries to leave Uganda to reach the United States of America, but Nairobi is the farthest she gets. Through bribery she has gotten a passport but a visa is denied her. Then she and another child soldier decide to travel to South Africa. There she receives the news that the father of her boy child has died in battle. For four years she stays in South Africa. She gets into trouble with the long arm of the Ugandan Secret Service. In the end the Home Office of the South African government helps her in contacting the UNHCR. In 1999, on the 21rst of June she lands at the airport of Copenhagen, the Danish capital. A new chapter in her life starts.

China (her army name) Keitetsi has written a captivating book on her life as a young girl. A young girl without a proper childhood. When she stayed at her family’s place, she was beaten and experiencing a lack of love and shelter and security. In the army where she served for many years she experienced a similar lack of love and security and shelter. She had to fight her way through life. Scarred and bruised and insecure. May she grow up to be a healed person.