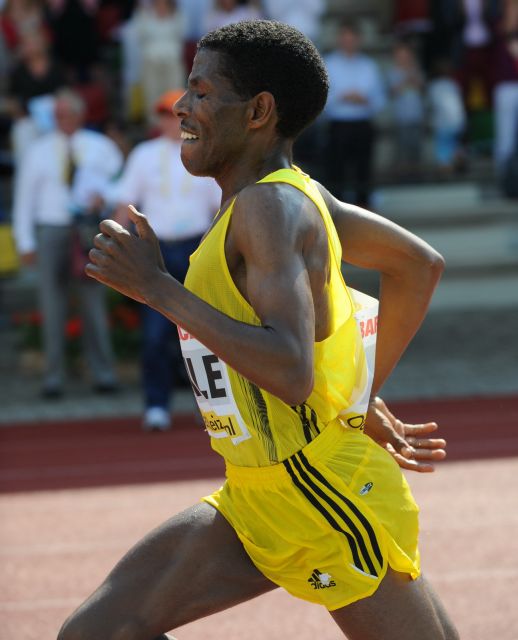 The last information I read on the long distance runner Haile Gebrselassie was that he intended to take up arms and join the Ethiopian army to fight against the inserruction in his home country. This man with so a long list of victories no longer runs the races to compete for world titles or Olympic titles. His career made him a succesful runner and also a succesful businesman in Ethiopia.

This book tells his story from a young boy who went running to school, who worked in the fields of his father, who decided to take the bus to the capital city to join in a running event. It is a story of endurance, of crossing boundaries, of setting new limits, of celebrations around the world.m Now matter how far and wide he travelled he also came back home to Ethiopia. He once gave as one of the reasons for the great impact he and his fellow runners from this ancient country made in the world of athletics the nationalistic attitude of these runners.

The story of Haile is intertwined with the meetings he had with a group of German long distance runners. They wanted to join an running event in the highlands of Ethiopia. In this way this group came into contact with Haile Gebrselassie. Throughout the years the German and Haile kept into touch. Haile ran in the marathon in Berlin and the group visited Ethiopia, met with Haile at his own place, organized events, help to build a school in a rural area.

At the end of the book there is much information on the the races that Haile run, his records, the results made by his compatriots. The book has become a rich source of information on the running career of this world famous runner. Gebrselassie had announced his retirement after the New York Marathon of 2010, so the results mentioned in this book end with this marathon. But after his retirement Haile decided to start running again, with good results. These races are not included in this book.