Wembley is the name of the beautiful and historic soccer stadium the the British capital.

Wembley is also the name of a young soccer player from an unnamed country in West Africa. He managed to travel to The Netherlands and hopes to make a name for himself in the soccerworld and especially he hopes to get a contract with the Amsterdam club Ajax.

He starts playing soccer in Amsterdam, but not at his desired club, but at a small local club, named RAP (=Fast). He becomes an important player and is a goalgetter. When the story develops it becomers clear that Wembley hasd become the victim of a shady deal between the chairman of RAP and the ‘agent’ from the same ethnic group as Wembley. Wembley is married and his wife still lives in his homecountry, and has no longer any contact with his wife. He marries another woman  in the hope of getting a permit to stay in The Netherlands. The permit he gets. But the journey to be a succcesful soccer player is a difficult journey with many winding roads. He tries to enter the training facilities of Ajax to show his skills in a desperate attempt to get the attention of his favourite club. Members of the security team escort him from the field. End of exercise. 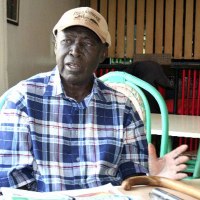