This is the kind of book I really like very much. A book set in a clear context, based on thorough research. And not unimportant: it is highly readable.

The work on the plantations is done by workers who have been hauled from Angola, cheap labour, cheap circumstances and hard circumstances. A key question here is the legal position of the workers. Are they workers, with all the benefits going with it? Are they slaves? Slavery has long been abolished, but are there still vestiges of slavery on these two islands? The British have an interest in crippling the plantations on these two islands, but in what way? The Colonial Office of the British Empire will send an experienced civil servant to the island to monitor the situation of the workforce and report back to London.

What will Portugal do? The King decides to send a new governor to these two colonial islands. He has to look into the local situation, but probably more important, he has to establish a relationship with the British envoy who will come at a later date. The intention is to influence the report of this British envoy so as to make it favourable to the Portuguese government.

The Portuguese king decides to send Luis Bernardo Valença, 37 years young / old, single, he studied law and now runs the shipping business of his family. He has published articles on colonial issues and has made a anti-slavery stand. Although he is single, he has clear eye (and other bodily parts) for the female part of the population.

Luis decides to accept the appointment and travels to São Tomé, where he settles and moves at a fast pace to acquaint himself of the two islands, he visits plantations, he organizes parties. He gets a clear view of the situation.

Then the British envoy and his lovely wife arrive after a shipwrecked career in India. The two men meet, the man and the woman meet. Diplomacy and love at the square inch. It is clear what the stand of the governor is, he is still ant-slavery and anti-plantation situation as it is.

Miguel Sousa Tavares brings together many strands, without losing himself in minor things, unrelated to the main task.  I will not give away how the story unfolds. I recommend you find a copy of this book, read it with clarity and see the strands being brought together. 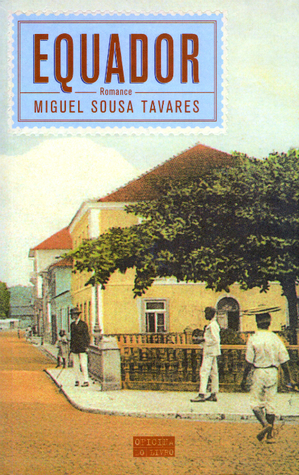 One thought on “EQUADOR”